This October I spent a remarkable couple of weeks in Chile exploring its capital, Santiago, and the far North East of the country. High in the North I spent time with a group of wonderful, resolute, jovial Aymara weavers and their landscape of the high plateau of the Atacama Desert (thank you to all my companions, to the British Council for its generous support and to Gabriela Farias Zurita for instigating it!). My trip was designed around a series of events to galvanise ideas and action around fashion and sustainability in Latin America, with Santiago at its hub. To inspire a revolution-of-sorts in a continent that loves a revolution… heaven! And before that to get a sense of the place. To feel and experience what sustainability in this context is and could be.

So we set off from Santiago on a trip North, ultimately to a community of Aymara people in the new town of Colchane strung out along the road at the border crossing with Bolivia. What struck me first was that the Aymara people and their desert land are full of colour and light, and both are extraordinary. They brim over with dancing, clear, saturated brightness, threaded through woven cloth and garment, through human relations and the natural world. It left me with a series of revelations about the way things are done in the West, made clear by mountain light and life. I’m sure that the altitude that changed the intensity of what I sensed and saw. Colchane is high in the Andes at 4000m. At this altitude there is less than two thirds the level of oxygen than at sea level, and for two days I was laid so very low with altitude sickness. But when I emerged, my dream-like two days of illness and oxygen masks and sleeping in an Aymara home, added to a feeling for the people and the place that was intense. It was a view into another side, a different world, where everything, including the very air we breathe, is changed.

The high plateau in the Atacama Desert supports a warm, gentle people with a textile culture that characterises – that defines – Andean culture. The Aymara weavers work on back strap hand looms, with the other end of the warp anchored to the ground with a spike. They weave with yarn shorn and spun by hand from their herds of llama and alpaca. They compassionately tend these animals and have ceremonies to bless the herd’s fertility, health, for the harvest of fibre that becomes the cloth that becomes these people’s identity and income. They decorate the beasts, name them, love them with pom-poms and tassels and offerings to Mother Earth – to soil, air, water and moon. They honour these animals because of the gifts these animals confer upon them – the fibre and meat – for the livelihoods and meals they enable. It is a precious reciprocity in action. The Aymara “write” in pattern woven in cloth, their language having no script. The animals and landscape are part of their alphabet. Their records and stories are told through textiles. The interlacing of fibre thatches their roofs, catches fish, transports goods, enables record keeping and accounting (through the remarkable quipu, a series of lengths of knotted rope, tied together with an intricate and complex system of knots) and so people are carried and swaddled in cloth and connected to place and what the land supports. An intense and interconnected flourishing: a type of fashion sustainability.

There is so much to say about these people and the way they blend modern and ancient: the rucksack (not new I know) carried inside the folds of the even more ancient awayu (the square piece of woven fabric used for everything from carrying babies to drying crops the design of which has not changed for a thousand years). The delicious lack of hurry in personal interactions which co-exist with sophisticated multi-tasking: the ever-present folding of tasks and activities into each other, spinning while walking, teasing while caring for each other, quinoa and clothing both cultivated together. The ubiquity of mobile phones held to heads bedecked in traditional straw hats with bands of ribbon. Not only that but the duality that underpins the Aymara culture, the belief in not one thing but in two, a pair, means that things are not conceived of as a single ‘I’ but as a ‘we’ – as a series of linked horizontal relations not hierarchies.

But perhaps the thing that struck me most was the directness of the Aymara’s connection to the world. There was nothing mediating their lives from the big, raw earth. Nothing to come between the dust and the cloth. Precious little to break the scarifying wind that blows across the high plateau and to provide shelter from the intense sun and the extremes of heat and cold. Theirs is a life of association with season and rainfall, with the ground on which they kneel to entangle warp and weft. I don’t wish to sentimentalise it; it is a hard life. But they have a sense of place, a rich ecological literacy that I was blown away by. They could name birds and mammals at hundreds of paces, flora and mountain ranges were instinctively known. The rhythm of the place was in their songs. The world is familiar, fully inhabited by these people. They actively take responsibility for it.

For my part I too sought to sink into the place and we tracked the smoke curling from the silhouetted crater of the Isluga volcano; we sat in the expanse of a salt lake, white and hairy as felt; we lingered in a cactus forest, which adds to its height one centimetre every year meaning many of its number were elders of 1000 years old or more; we bathed in hot springs where the belly of the earth gurgled up and around us, in a primordial soup. We gathered resin and seeds from lichen the size of boulders that grow only above 4000m – a marker of altitude. We wandered through plains of sulphurous geysers, bounded by mountains, a place too big to gather in one view. We passed vicuña, impossibly handsome camelids. Shy, flighty, fawn brown and cream, their eyes and mouths chocolate. They rolled in the dust, and kept us in their sights. We watched Chilean flamingo fly, land, feed – a pink, cochineal and black flurry. And emus and Andean geese and black-headed gulls that never go to the sea. 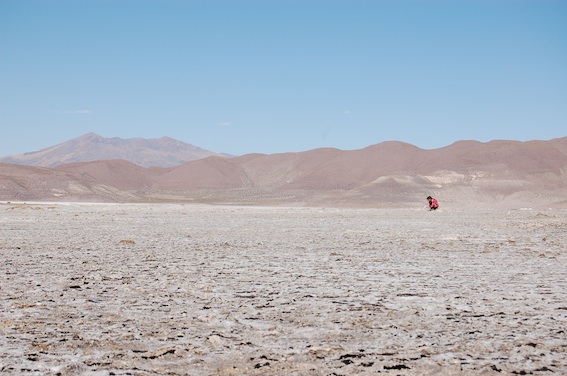 Colchane had only a few hours of power at night and when the generators went off and the town plunged into darkness, the sky literally fizzed with stars. It was enveloped completely in light. From horizon to horizon the sky glowed with luminous, focused specks of wonder. Not the diffuse haze of a sky obliterated by light pollution that hangs above the UK, but an entirely different world of both darkness and light. I have never seen such a sky before, yet it’s always there. I felt daft in the face of the blindness of much of my life. And hoodwinked by some bits of Occidental ‘progress’ and ‘culture’ that simultaneously impoverish us so.

And then we headed back to Santiago to add a little where possible to fashion and sustainability actions in a Latin American context. It seems to me that many daily actions and habits of mind of Andean culture speak naturally to a sustainability agenda – the task is to figure out how this unique way of being, doing and having can take the lead in the fashion-sustainability movement.

But Andean culture is not the same as Chilean culture. Indeed Chile is at a point of monumental change – it is now regarded as the number one developing country fashion retail investment location, ahead of China and UAE. Chile is on the cusp of a massive expansion of consumer activity. The sector and its sustainability actions are at an inflection point. Which path will it take? The most travelled – towards increasing rates of production and consumption of fashion goods and all the attendant problems that brings? Or something other? The seminars, discussions and presentations that I was part of attracted hundreds of participants who are unearthing and practising many other types of fashion future than one based on consumption, that perhaps show Chile’s ancient roots. The light and brightness of change I saw in the Andes is growing. 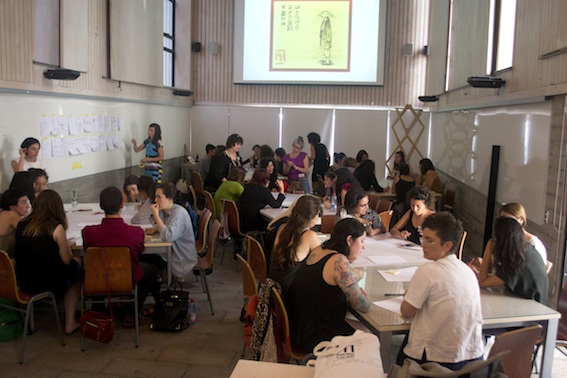 (I liked your expression “… a rich ecological literacy …”
It is a beautiful synthesis
Thanks for your story!
Vivi – Bariloche – Patagonia Argentina)